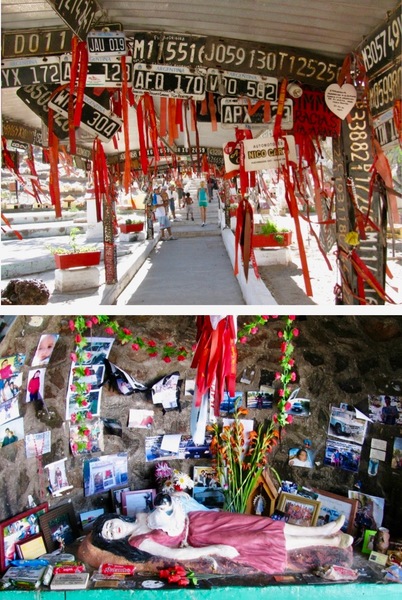 One of our travels through Argentina took us to the northern wine country of Mendoza and San Juan. Apart from visiting wineries we drove around a lot to explore this beautiful, desert-like region with its magical valleys and strange landscapes. We drove by countless little roadside shrines, if that’s what they were. Actually we weren’t quite sure what they were, but they were practically everywhere. Maybe they weren’t shrines, but they were something, and these somethings had plastic water bottles piled high all around them. Empty ones, half empty ones, full ones. Were people just dumping their plastic bottles there? Or were these recycling stations? That seemed unlikely, this being rural Argentina where recycling doesn’t seem to be much of a concept.

One day we made an overnight trip to the spectacular Valley of the Moon (Ischigualasto Provincial Park), a unique geological area  which allows us to look back at the past of our planet all the way to the Triassic Period. It was a strange road trip from the city of San Juan to there - hours and hours of driving along a lonely road without a single gas station or convenience store. No gas, no water, nothing.

Soon after leaving San Juan, and before the road became so deserted, it went right through a tiny little town named Vallecito, a place we had never heard of before. There wasn’t much there, except THE SANCTUARY - a cluster of close to twenty chapels dedicated to La Difunta Correa -  the Dead Correa - who is said to have perished of thirst and heat stroke in this desert region in the 1840’s. According to legend she had followed her husband who had been drafted  into a local civil war, walking through the desert with her baby in her arms. She died of heat stroke and exhaustion, and her body was found by shepherds some time later. Her baby was miraculously alive and still nursing at the dead woman’s breast. This turned La Difunta Correa into a folk saint, and the survival of her child was her first miracle. She became the saintly protector of travelers and a symbol of motherhood, all without the blessings of the Church.

A shrine was built on the spot where the miracle took place, and another, and another, and another. Today hundreds of thousands of Argentinian pilgrims visit the hillside sanctuary every year to honor “La Difunta” and ask for protection on the roads, or in life in general. One chapel belongs to truck drivers, and it is decorated with license plates. Another one, maintained by a soccer team, is full of sports trophies. A third one features diplomas of successful students - seventeen or eighteen chapels altogether.  On top of the hill is the chapel of La Difunta herself where a plaster statue of the miracle maker lies with her baby at her breast.

On the day we were there, like on every day, worshippers lined up to climb up the steep hill and visit all the chapels, carrying gifts of water bottles, license plates, or other offerings, with some of the faithful negotiating the many steps on their knees. They will ask for a miracle, or give thanks for one already performed. The piles of plastic water bottles we had seen along all the country roads were indeed little satellite shrines dedicated to La Difunta, full of offerings to quench her thirst.

For more, read here and here.