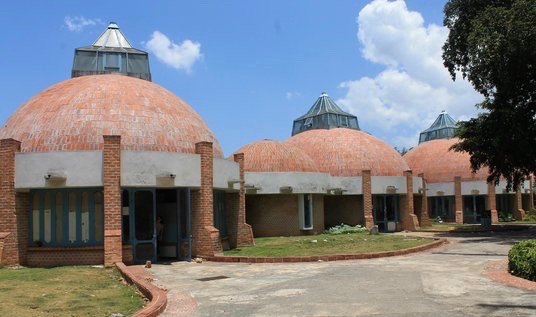 On one of our visits to Havana we had an opportunity to visit the internationally renowned Instituto Superior de Arte (ISA), a school for visual arts that was formally established in 1976 by the Cuban government on the grounds of a former country club in the Havana suburb of Marianao. Roberto Diago, whose works we have been collecting for some 15 years, took us there. (Please visit cubanartcollection.com's portfolio of Diago’s work.)

The ISA was part of a planned group of campuses for visual, musical, dance, and communications arts that were conceived and founded by Fidel Castro and Che Guevara in the wake of the Cuban Revolution. Of the three major complexes originally planned and to be designed by three architects, Cuban-born Ricardo Porro and Italian architects Roberto Gottardi and Vittorio Garatti, only the ISA buildings were finally completed.

A series of interconnected domes built with brick and terracotta tiles inspired by Catalan vaults make up the different studios which include print making, sculpture, painting, and ceramics. The sensuous curves and domes designed to represent the body of a reclining woman offer stunning perspectives to the viewer. Due to its visionary  architecture the ISA is currently being considered for inclusion on the World Heritage list of sites of “outstanding universal value” to the world.

The fascinating story of this unique art complex, and its falling victim to changing post-Revolutionary politics, are brilliantly captured in the 2011 documentary Unfinished Spaces