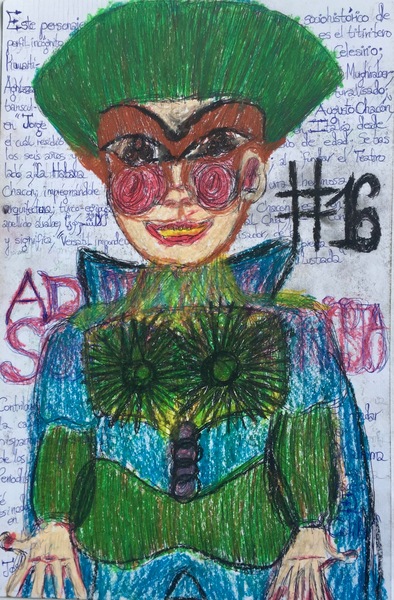 Josvedy Jove Junco, nicknamed El Sirio (The Syrian), was born oxygen-deprived in Havana, Cuba in 1977. As a child he was learning disabled and frequently exhibited sudden mood changes, paranoia and hallucinations. Still, he managed to get an accounting degree and even enrolled in a university program which he soon after abandoned. As a young adult he frequently acted aggressively, frightening his mother. After her death his strict father, a retired member of the military, took Josvedy to live on a small farm on the outskirts of Havana. His aggressive and delusional behavior continued.

It is not known when during his young adulthood Josvedy started writing and drawing in notebooks, covering every inch of every page with images and dense text controlled by a unique calligraphy and accompanied by symbols and references known only to him. The stories he depicts are made-up fantasies and legends where real historical events are transformed into versions allowing their creator to assume different roles: he becomes a member of European royalty (“Prince of England”) who speaks dozens of languages, a Nobel prize winner, a scientist, an inventor, and so on. His most recent works combining pastel crayon drawings with crowded text written with ballpoint pen are double-sided, his drawings and enigmatic observations covering both sides of the notebook pages he works on. The pages are now numbered, part of a real or imaginary series that tells the story of the Conquest of Cuba, which continues to unfold.

His works were first featured in the  “Echoes from the Unconsciousness” exhibition at the Spanish Embassy in Havana and have since been shown in several venues in Havana, New York and the Netherlands. He is represented by Riera Studio in Havana.

Please view our works by this artist in the Outsider Art from Cuba/Cuban Art Brut portfolio on our website.