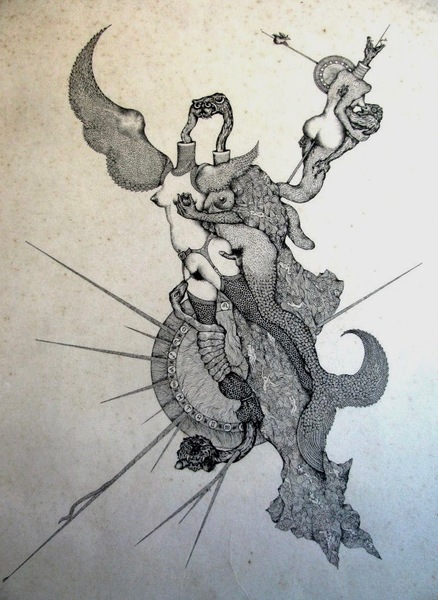 Darcilio Lima had his first art show at 10 years old. He was a crucial player in Rio’s hedonistic underground art scene in the 1960s. He spent a significant period of time in the 1970s in Paris, sleeping in a graveyard. Like any legit surrealist, he was friends with Salvador Dali. And, yet, the Brazilian artist’s name remains widely unknown, despite the captivatingly fine lines and hypnotically twisted figures that ooze forth from the darkest depths of his subconscious. (Huffington Post)

One of the most enigmatic figures in Brazil’s art world in the 1960’s and ’70’s, Darcilio Lima and his works all but vanished in subsequent decades. Only recently has this mysterious, hard-to-pin-down artist attracted international attention again. Last year his works were included in the Reina Sofia Museum (Museo Nacional Centro de Arte Reina Sofía) in Madrid, and later the same year in New York’s Metropolitan Museum (Met Breuer).

Here is a link to an article we published about Lima, the man, and his works, in 2010.