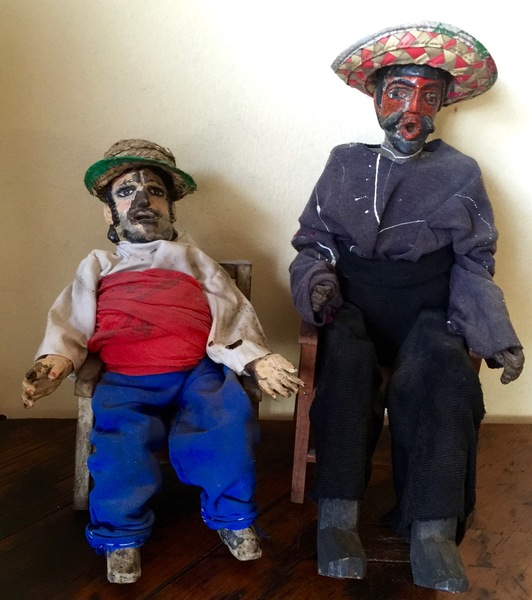 
Maximon, alternatively called San Simon, is a semi-pagan, semi-Catholic “saint" who is worshipped throughout the Guatemalan highlands. He is probably a remnant of a pre-Columbian idol that was “Christianized" in appearance to keep missionaries from destroying it. It is generally believed that this unusual figure in the traditional religious life of highland Guatemala represents a combination of Judas, the much feared Spanish conqueror of Guatemala Pedro de Alverado, and the traditional Mayan god Mam. (Mam is the ancestor/grandfather figure, also some one associated with evil). The Judas aspect of this complex character presumably represents the traitor of Christ returned to earth repentant and in order to perform good deeds.

Maximon is a special resource to his worshippers. Viewed as a drunkard, merrymaker and womanizer with exceptional (including sexual) powers, his role is to grant his believers absolution in situations and crises of conscience which the church "would not understand". That includes sexual misconduct, also drinking and gambling. He regulates morality within the coummunity. He is the patron of money, commerce, and business travel. He also absolves the native believer from acts of betrayal he or she was forced to commit against their own culture, their traditional world. Yet his powers are employed to corrupt as much as to absolve.

In this role, Maximon can do both good and evil, and his worshippers' relationship with him is ambiguous. He is loved and feared at the same time. He is the "master of sexual disorders" such as adultery and  homosexuality, and the guardian of sexual relations. For these and other reasons, he is shunned by the Catholic Church, and the Maximon cult has in the past led to bitter confrontations between the Church and the communities that consult him.

In most of the villages where he is worshipped Maximon is represented by  a nearly life-size effigy that usually wears western clothes and a hat and sits in a chair. His face is a carved wooden mask with an open mouth and a cigar in it. He "resides" in a room or chapel specially dedicated to him. The act of worshipping him or asking for favors includes offerings of money and a generous supply of liquor, cigars, and candles.

Smaller versions of Maximon effigies are used as household saints and placed on home altars. They are usually made from carved wood. They have articulated arms and legs, are seated in chairs, wear traditional campesino clothes or a business suit, and a straw sombrero or other hat. They often hold a stick. Their faces typically have the mouth opening for the ubiquitous cigar. These small household figures are sometimes offered for sale to pilgrims near his official “residence” in the village. During Semana Santa, the Holy Week before Easter, the big Maximon effigy is usually carried through the village streets to be viewed and venerated by the local population. The smaller altars are kept inside the traditional homes. Few owners keep them merely for decorative purposes since Maximon can exert a damaging influence over home and family if not treated well. So they get the traditional offerings of tobacco, booze and money.

Scholars of Guatemalan folk traditions view Maximon as a key element in the native religion and a symbol of commitment of the highland Indians to their ancient lifestyles and values. They see Maximon as link between ancient and current events, as the past made present.

Please view our collection of Maximon figures on our website, in the Guatemalan Folk Art portfolio