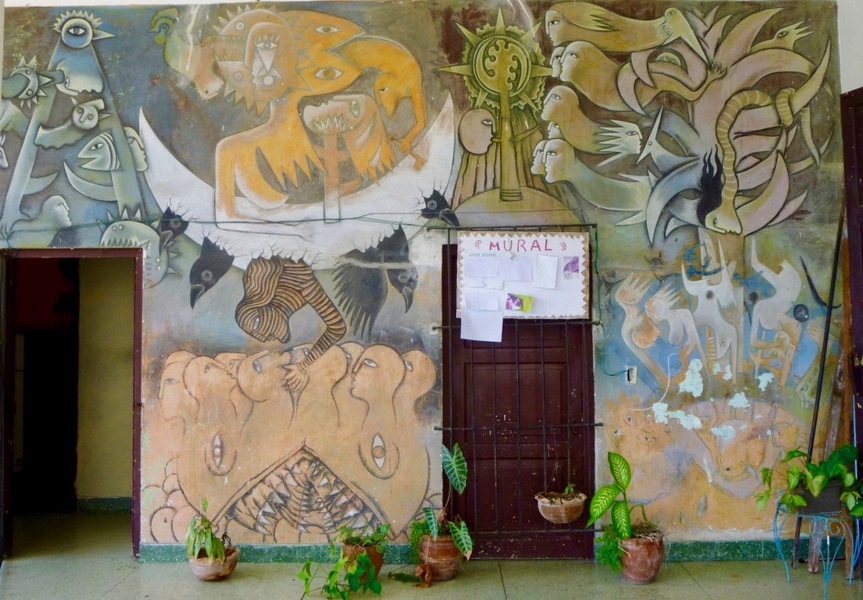 Image: A section of the mural discussed here.

Manuel Mendive Hoyo needs no introduction. We ourselves were long aware of this artist’s extraordinary body of work in the early 1990’s when we visited Havana during the notorious “special period”. He was already an internationally known artist then. Now, decades later, according to Wikipedia, “Manuel Mendive (born 1944) is one of the leading Afro-Cuban artists to emerge from the revolutionary period, and is considered by many to be the most important Cuban artist living today”. And today he is everywhere. A couple of months ago he had a big installation at the Kennedy Center in Washington, DC. Right now he is subject of a solo exhibition at the Bronx Museum of Art in New York City where he presents “a new body of works focused on his continued visual interpretation of narratives of Yorùbá-Lucumí culture and wisdom literature, extending to the universal ideas and relationships between humans and nature”. His international successes are too many to mention.

Since then we have been back to Cuba many times, and we have seen changes unimaginable back in the early 1990’s. During a recent trip to Havana we decided to visit Mendive’s little town, the sleepy, charming colonial village where he has made his home for most of his life. In Santa María del Rosario, 20 km southeast of central Havana but situated in the deep countryside, time seems to have stood still since it was founded in 1732. Its 18th century baroque church has been designated a “National Monument” by the Cuban government, and the Lonely Planet has called it “one of suburban Havana's most attractive secrets”.

To get there we took public transportation from Havana, starting with the #97 metro bus, followed by several other local buses. That alone was an adventure. We got to Santa María del Rosario in the early afternoon, obviously siesta time. After visiting the cathedral we walked down several unpaved roads which all led to fields and farms. We met more roosters than people.The only vehicle we saw on the way was an ancient tractor.

Back in the “center”, near the cathedral square, we came across a one-story building with an open portal which advertised itself as a Casa de la Cultura. The reception desk was staffed by a visibly bored attendant who nodded indifferently when we asked it we could enter. There was nothing and no one there, and nothing on view. Except an enormous mural, painted fresco style, badly deteriorated, that covered an entire wall, immediately caught our eye. The Mendive signature symbols were there: Nature spirits and ancestor gods interacting in a yoruba ritual with mystery animals and plants and with each other on this faded building wall, almost like a tropical version of a medieval ecstacy painting depicting the battle of good versus evil. But how could it be that this remarkable work was so neglected? Did no one care that the paint was fading and flaking, and that time, humidity and carelessness had much diminished the vibrancy of this masterpiece?

Back at the front desk I asked the bored attendant about the mural. I wanted to know who painted it (of course I knew the answer), and when. He yawned and shrugged his shoulders. “That must have been some time ago. I believe it was some painter from around here. I don’t know his name”.

That evening we were back in Havana. The next morning we walked past Cuba’s world-famous art museum, the Museo Nacional de Bellas Artes where countless Mendive painings and sculptures command pride of place and visitors from all over the world contemplate them in awe.