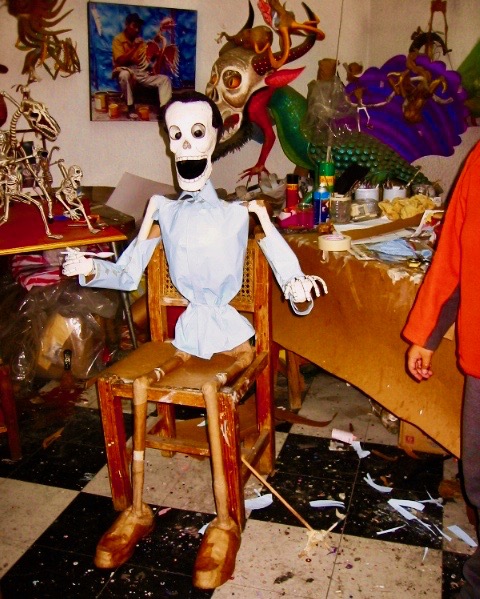 Anybody even vaguely familiar with Mexican folk art knows about the Linares family and their paterfamilias, Pedro Linares, who invented a new folk art form in the 1930’s which has been imprinted on Mexican popular arts ever since.

Pedro Linares López was born in a humble inner city neighborhood of Mexico City in 1906.  After earning a living by making piñatas (to be smashed) and Judas figures (to be burned) on specific holidays, he became a cartonero, a maker of papier-mâché fantasy figures, and, ultimately, the inventor of the alebrije, the now internationally famous and widely collected icon of Mexican folk art. Diego Rivera and Frida Kahlo were among Linares’ early clients.

In their workshop on the outskirts of Mexico City, Don Pedro’s descendants continue this art form to this day, making alebrije monsters along with representations of famous personalities and “Mexican” popular characters, many based on the 19th century calavera cartoons created by José Guadalupe Posada - all from papier mâché and sometimes life-sized.

Some years ago I had the chance to meet Elsa Linares, Don Pedro’s granddaughter, and a cartonería artist herself. She picked me up at my house and drove me to her family’s workshop where her father, Miguel Linares, her mother, Paula Garcia Ventura de Linares, and her cousin Pedro Linares were busy at work. Entering this work space, located in a nondescript, industrial neighborhood on the edge of the city, is truly transformative. It is the place where to this day monsters and fantasy creatures are born and take flight, and satirical Day-of-the-Dead skeleton characters take shape and get moving, or so it seems.

The alebrijes of the Linares family of Mexico City are figures in cardboard, sometimes with a wire reinforcement: they are made in various sizes (from fifteen centimetres to one metre tall) and represent the strangest of monsters, quite extraordinary, fantastic, multißcoloured beings. All sorts of paper are used in their creation: brown paper, kraft, manila, newspaper, thin China paper, and cardboard for the details. They are painted with acrylic colours and finally an acrylic gloss lacquer is applied.

Don Pedro Linares used to insist that alebrijes were his own invention, and not only the objects but also the underlying concept. Of course, strange and monstrous zoomorphic figures have existed in very different cultures throughout history, all of them representations of evil. …

The alebrijes of Mexico correspond to the type of folk art that has no immediate practical function. Magical though they may appear (and there are people who attribute to them a magical value), the purpose behind their existence is purely and simply ornamental: this characteristic, of course, makes them comparable to the art of the elites, and differentiates them from ex-votos, whose main function is religious, and the Judases, created to be burned as traitors. As we have seen, most folk art is made to fulfill some function beyond that of merely being contemplated. Not alebrijes, however: they are made only to be purchased and admired.

Their cradle was humble. They entered the world … from the prodigious hands of Pedro Linares. … Don Pedro was looking for something new to which he could apply his skills, and – assisted by chance and the breadth of his unbridled imagination – he created the alebrije. On the website designed by his granddaughter Elsa Linares, one reads that when Pedro Linares fell ill at the age of thirty and became delirious, he dreamed that he was in a strange place and ‘saw a donkey with butterfly’s wings, a cockerel with bull’s horns, a lion with an eagle’s head, and all these animals were shrieking at him just one word “Alebrijes!” Each animal screamed louder and louder, “Alebrijes! Alebrijes! Alebrijes!”’

Nowadays these fantastic creatures are being manufactured by both men and women. Don Pedro’s wife only helped, but his three sons Enrique, Felipe and Miguel learned the art from their father. Now, in Miguel Linares’s family, it is different: his wife Paula García makes alebrijes and many other items such as calaveras or piñatas and has herself been creating figures, generally on her own, for more than fifteen years. Her two daughters, Elsa and Blanca Estela, and her son Ricardo, have also learned the art of making cardboard figures. Blanca got married and abandoned the art for a time, but a few years later she separated and went back to her parents’ home and the craft.
From: Eli Bartra: Women in Mexican Folk Art - Of Promises, Betrayals, Monsters and Celebrities, Cardiff, University of Wales Press, 2011.