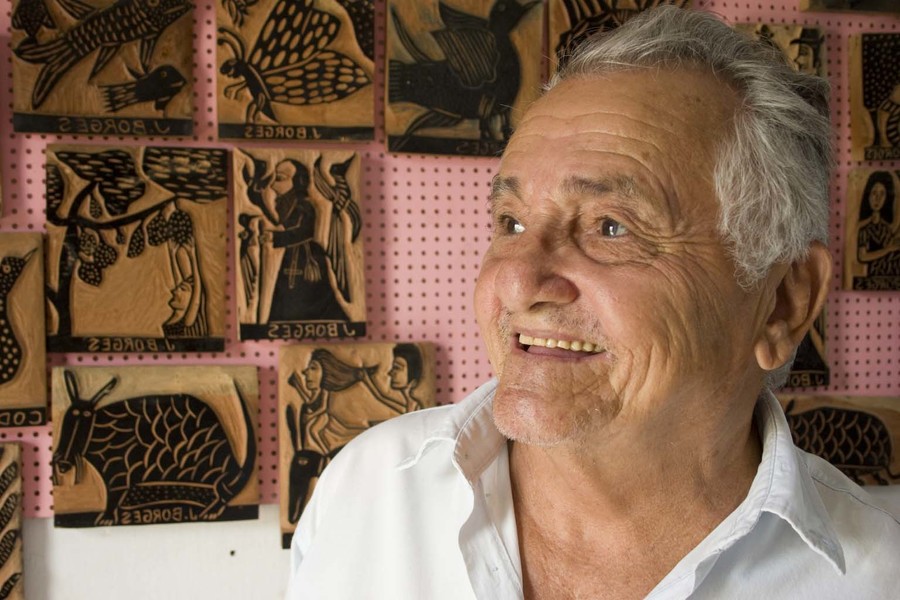 José Francisco Borges (J. Borges) lives and works in Bezerros, Pernambuco, Brazil where he was born in 1935. He is a self-taught woodcarver, woodblock printer and poet who started as an itinerant peddler of home-made illustrated chapbooks addressing popular themes, folk tales and legends native to the impoverished Northeast (Sertão). This unique art form - "literatura de cordel" (string literature) -  consists of written verses and woodblock prints illustrating the rhymed stories. Traditionally, the cordel booklets were sold at country fairs and rural markets where they hung from a piece of string or clothesline. These long, narrative poems with their woodcut illustrations on the cover were sung out loud to a mostly illiterate rural population. The traditional subjects - romances, fantastic stories, animal fables, religious traditions - and themes based on current events, famous people or politicians, can be hilarious, romantic, satirical, and even racy. These days cordel booklets are also sold in Brazil’s big cities where much of the rural population of the Sertão (outback) has migrated. At the same time, woodblock prints originally illustrating the booklets have been produced in larger formats and are sold separately, often to collectors. On occasions the woodblocks themselves are sold.

J. Borges has become the most famous of Brazil's cordel artists. His works were prominently featured in the 1992 exhibition at the American Folk Art Museum in New York City: "Visiones del Pueblo – The Folk Art of Latin America" and in an exhibition at the San Antonio Museum of Art. Borges' pieces are included in public and private collections worldwide and have been published in numerous books, catalogs and articles. He illustrated "Palabras Andantes" (Walking Words) by Eduardo Galeano, 1995. A volume of Borges' own poetry, illustrated by his woodcuts, was published in Brazil in 1993 as "Poesia e Gravura de J. Borges”.

Other self-taught masters of this art form include José Costa Leite, Francisco Amaro Borges and Abrão Batista. For more reading, go to "Stories on a String: The Brazilian Literatura de Cordel" by Candace Slater.

The woodcuts and print blocks by J. Borges in our collection were purchased from the artist himself in the 1990’s.