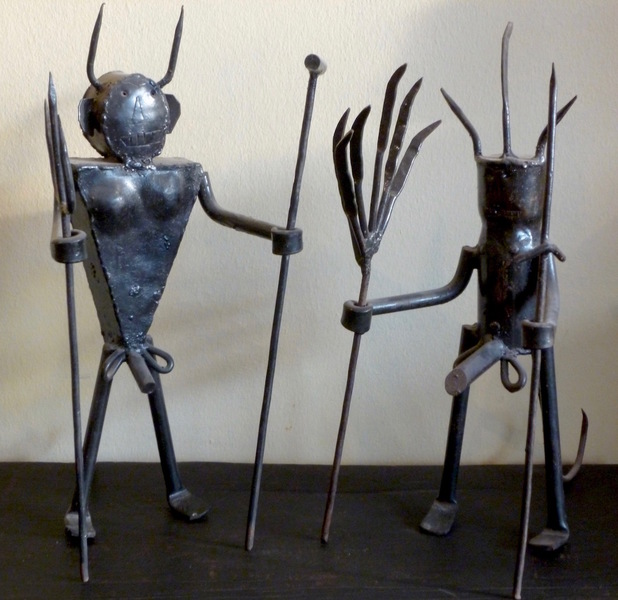 Brazil is still very much part of the African diaspora today, the result of centuries of  trans-Atlantic slave trading. To this day African ancestor gods are worshipped here, and the further north one travels in the country, the more obvious this becomes. This form of cultural resistance endures in the face of rapid modernization of this huge nation, and of the inroads made by evangelical sects.

One of the most important deities in the Yoruba pantheon of western Africa is Ogún, god of war and of ironworking, patron of blacksmiths and of all who use metal in their occupations. He continues to rule the spirit world of black cultures throughout Brazil and the Americas. Ogum (in Portuguese) embodies the transformative power and sacred role of iron and as such has given ritual blacksmiths (ferramenteiros) a magical gift. While many ferramenteiro artists, who are practitioners of Afro-Brazilian cults and are often initiated priests, are not known outside their immediate neighborhoods, they perform a vital function in Afro-Brazilian communities. They turn scrap iron into sacred art pieces, endowing them in the process with divine powers which originated in the African spirit world of ancestors. They are recyclers of the most banal of materials - old mufflers, metal cans, car parts - into devotional art. We have visited several of these blacksmiths in Rio de Janeiro and Salvador, Bahia and watched them at work. This is serious business. When the welding torch hits the metal you can almost see sparks of the Divine.

The central figure in this art form is the Yoruba god Eshu (Exu), who in Brazil can assume both male and female forms. His or her accessories symbolize the crossroads of life, and the gates to human destiny. In Brazil, he is always depicted as very phallic, or she, with explicit female sex organs. This is a sexually ambivalent and morally ambiguous deity.

Exu is the trickster, messenger, gatekeeper and guardian of intersections, the symbolic meeting place of the worlds of the living and the dead. During special ceremonies it is to these metal avatars of Exu that worshippers first direct their prayers and offerings in order to access the wider pantheon. The sculptures usually come with special implements, like staffs or tridents, which symbolize divine power and the presence of the crossroad, a fork in the direction of destiny. At the moment of worship the metal object reaffirms the relationship between the human and the sacred and itself becomes an altar.

Some of these ritual blacksmiths have become recognized as artists in their own right. The most prominent ferramenteiro in Brazil is José Adario dos Santos (Zé Diabo) from the northeastern state of Bahia, the most “African” of Brazilian states. He was born in 1947, and he has turned scrap iron into sacred art pieces since the 1960’s. His sculptures are included in major museum collections in Brazil, and I even discovered one in the Smithsonian Institution in Washington, D.C.

The sculptures shown here are by this artist. They were made in the early 1990’s.

Please see the works by this artist and other sacred metal artists on this website.