Traditional Cuban Music not for Tourists 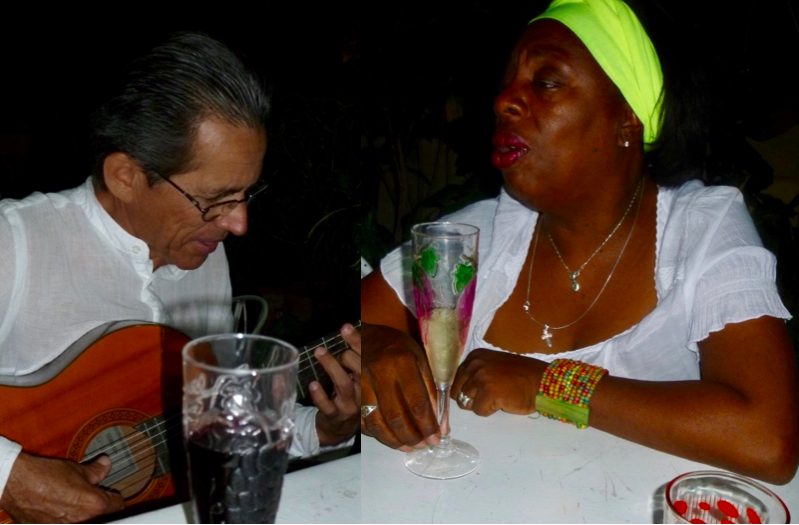 In 2005 we went to Cienfuegos, Cuba, for the first time. Our main objective was to get to know several Cuban artists whose works we liked, and visit some art galleries we had heard of. First we looked up the well-known painter José Montebravo and, the same day, got to know Miguel Angel Rodríguez who runs the Cienfuegos leading art gallery, Galeria Maroya. The two were good friends, and for years to come we we major clients of both.

The next evening we were invited to a gallery opening somewhere, and afterwards the party shifted to Miguel Angel’s house. Everybody came along, including that terrific musician duo who had played during the opening. They continued to perform throughout the evening - boleros mostly, also son and mambos, and songs of the Cuban Trova tradition:  Noemí singing, with her incredibly rich and buttery voice that went right under my skin, accompanied by Froilán with his gentle classical guitar. Steeped in Cuban musical tradition, they were the perfect team for the occasion, and for the city of Cienfuegos, birthplace of the legendary musician Benny Moré whom the Miami Herald considers “perhaps the most influential musician and popular singer the island has ever produced”.

Noemí Rodríguez and Froilán Álvarez are professionally known as Duo Así Son [así son = so they are]. They are an essential part of the Cienfuegos art scene and also a regular feature at the International Bolero Festival in Santiago de Cuba. They have performed abroad as well, once touring the South of France, another time Brazil, and yet another time spending several months in Venezuela as artists in residence. One might say Duo Así Son are part of Cuba's cultural heritage. They are not, however, commercial artists and do not perform in tourist venues.

When we first met them they had just gotten married even they had known each other decades before as young students. They told us their stories. After school they had gone their separate ways, raised families of their own and lost track of each other. Noemí had become a school teacher in Cienfuegos while Froilán pursued a different career elsewhere in Cuba. A musical event finally brought them back together, and they ended up as both artistic and romantic partners.

We became friends and stayed in touch with them. On several subsequent visits  to Cuba we met again, in Cienfuegos and Havana. Before going to see them again for the first time I asked them if we could bring them anything, expecting the usual long wish list you get when Cubans, still deprived of many material goods, have a chance to get something from abroad. No, they said, thank you, we’re good. When I insisted they said, well, perhaps some guitar strings for Froilán, they are hard to get. That was it. Nothing else. From then on, guitar strings is what we brought them.

We always stay in Bed and Breakfasts in Cuba, and several times Noemí and Froilán came to where we were staying to spend the evening with us. They always brought their musical instruments - she her incredible voice and he his guitar. Those were unforgettable evenings on the rooftop terrace or in the patio of our guest house, wherever we were staying. We brought those wonderful memories back to New York where we keep listening to their albums, like “Sabroso” and “Mágicos Destellos”.

Here is more about them.

I feel it is time for another visit.