When the Dead Come to Visit in Mexico 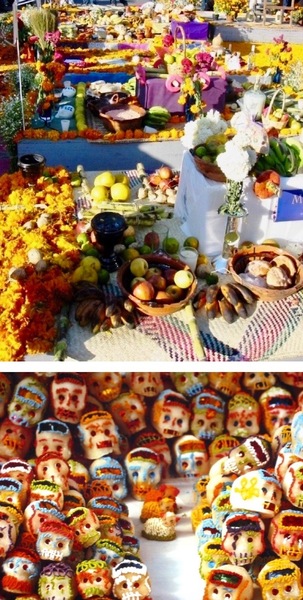 Every culture deals with the loss of life in a ritual way, often involving transitional periods from being to non-being or spirit. In many cultures, the deceased are thought to take a long journey into a fleshless nether-region where their souls are transformed into worshipped ancestors. Today, as in pre-Columbian times, life in Mexico incorporates death not only as a tragic event but also as a release from the hardships of life. The Aztecs feared the uncertainties of life more than the aspects of death. Their afterlife was determined not by how they lived, but by how they died.

Death in Mexico lacks the solemn, powerful and funereal feeling that it generally has in other countries, especially in Europe. In Mexico it is part of everyday life. As a common facet of life, it is treated with familiarity and, in a unique way, celebrated. It is regarded as a fundamental part of life, not as the end of existence. Death - of parents and relatives, friends, even animals - is acknowledged and honored by being presented in a joyful, entertaining way. This is a joyous time when for a few hours the souls of the dead are invited back and briefly enjoy the pleasures they were accustomed to in life. These important festivities are equally observed by rich and poor, across all class lines, as people share in essentially private, family feasts - family reunions which include the departed, returning from another world.

Death accompanies life from the moment of birth. Since pre-Hispanic times it has been considered part of daily life in Mexico, duality, beginning and end. Life-death-renewal is a never-ending cycle. In Mexico, worship of the dead and notions of a death god have existed since at least 1800 BC. Death and the duality of life and death were frequently depicted in pre-Hispanic sculpture: skulls, skull racks, skeletons, death gods. Early burials included many objects such as jewelry and clay, gold or stone figurines and masks representing aspects of death, to accompany the soul into the underworld. The present-day peoples of the former Mesoamerica continue this custom in various forms, with offerings to the dead now often placed on a special altar. Pre-Hispanic sculptures found in Mexico, beginning with the Olmec, depict the duality of life and death. Life and death, destruction and recreation, ever recurring.

The Mexica/Aztec population of Tenochtitlan believed that children, warriors, and women dying in childbirth were believed to be favored by the gods, as were deaths by drowning or lightning. Such people assumed special places in the afterlife.  Warriors and women flew around the sun like hummingbirds, children went to the nursing tree which dispensed drops of milk, etc. The Aztecs practiced human sacrifice: the hearts and lifeblood of sacrificial victims were offered to the gods in exchange good crops and fertility. Their spirits circled the sun like birds or butterflies. Aztec annual rites of death involved elaborate ceremonies with offerings to the dead in symbolic burial places. This included  flowers, tamales, turkeys and other animals, incense, drink, paper ornaments, paper costumes, maize dough idols, feasting and dancing. The Maya also worshipped a death god and had precise concepts of an underworld (Xibalba), with different forms of death leading to a different hereafter. Worship of the departed began at the moment a person died. To this day, modern-day Maya place many personal objects near the dead body or in the grave so the soul can take them along on its journey to the underworld. This process continues by placing objects on the family altar.

With the Conquest of the Americas, folk-religious practices and death cults of medieval Spain were introduced in the New World, blending with similar pre-Hispanic traditions revolving around harvest rites. The skulls which once adorned pre-Hispanic altars and monuments disappeared, to be replaced with images of the Grim Reaper. They eventually re-appeared at the base of Christian altars and churchyard crosses. In early colonial Mexico, tombs which in medieval Spain were quite simple, were lavishly decorated with skeletons, skulls, and poems for the dead. Catholic saints now coexisted with the Aztec or Mayan pantheon. Heaven and hell added new dimensions to Mictlan or Xibalba. The Catholic rites of All Saints’ Day (Nov 1) and All Souls Day (Nov 2) merged with pagan harvest rites. Rooted in Egyptian and Roman mourning practices, All Saints’ Day became the day to mourn dead children, All Souls Day dead adults.

While October 31 (eve of All Saints Day) is the moment of getting ready for the dead to come visit, some departed loved ones come before. Again, the order is determined by the circumstances of the death. On or around Oct 27 those who died with no survivors are greeted and honored in a particular fashion depending on the village customs. In many communities modest food offerings are placed on altars outside the homes for these “orphan” souls or animas solas with no living family. Those who died in violent circumstances visit on Oct 28; their offerings are also placed outside the home, to ward off evil spirits. In some villages or regions the night of Nov 1 is the time to calaverear: going from door to door to collect treats for the souls no one remembers.

The night of Oct 31 the dead children (angelitos) come home; they must be gone by the following mid-day. They are being served simpler foods, less highly seasoned, and candies and sodas. Children are succeeded by the dead adults (Nov 1) whose arrival is announced by ringing bells. The family formally greets their departed relatives who died most recently; through them all the ancestors are acknowledged. Hymns honoring the dead souls are usually sung during this day. Especially prepared foods and drinks are offered the visiting dead. By evening of Nov 2 the party is over and the spirits have left, to return again next year. For all of the Dias de Muertos  festivities there are significant regional variations with regard to ceremonial timetables, details or order of events, and parallel feasts incorporating Indian and Catholic rites.

Preparations for the elaborate activities are done well in advance, in October or earlier. Family ties and communal relationships become stronger during this time. The week before the events is frantic. Traders come to the markets with locally unavailable products such as paper puppets, papel picado, pottery. New pottery or other household items and candlesticks are usually purchased to honor the dead. Apart from shopping, activities include elaborate food preparations for the deceased’s favorite dishes, the gathering of flowers, and decorating the offerings. Marigold and purple cockscomb decorate graves and family altars. The marigold (cempoaxochitl) has been the symbolic flower of death since pre-Conquest times. It is believed to attract the souls toward the offerings. “Paths” of marigolds are strewn to guide the souls to their feast. They also show the way out of the home and back to the cemetery to make sure no stubborn soul lingers too long. (Souls that stay behind make trouble for the living.)

Bakeries are filled with special breads in the shape of skulls, crossbones, skeletons. Their windows are painted with skeletons scenes. Special bread-baking takes place in bakeries and often in private homes days before the events. Favorite foods are placed on the altar. Atole (a corn drink) is specially prepared for the living and the dead. By November 1, people have prepared the cemeteries for special visits. Tombs have been cleaned, repainted and decorated, crosses have been repaired or replaced.

Special foods mark all special days and holidays in Mexico, and particularly the Days the Dead. Typical dishes are mole and tamales incorporating many ingredients and spices. Red, green, black and orange chiles add color and warmth for the cold nights. Foods are served on special plates and bowls. Special bread are baked in many shapes, often symbolically depicting skulls and bones, decorated with dough, sugar, and food colors. Seasonal fruit and candies are served to honor the occasion. The candies include sugar bones, skulls and skeletons filled with syrup or sweet liqueur, little animals and coffins made from sugar and ground pumpkin seeds. Most prominent are the calavera sugar skulls, beautifully decorated with superimposed features and adornments  and gold-colored paper featuring the names of friends and members of the family on the foreheads of the skulls. All of these are arranged on the altar honoring the deceased. Old and young exchange sugar and chocolate skulls.

A table normally serves as a special altar for the occasion, covered with saints, flower vases and souvenirs important to the family, and decorated with papel picado or other decorative colored paper. The altar for the dead is usually close to the regular household altar. It is covered either by an embroidered cloth or specially purchased plastic sheeting.  Candles are placed in front of the altar. Special black clay candlesticks are used for the occasion. An arch of palm or other leaves complements the altar decoration, embellished with flowers, fruit and candy. Flowers and paper adornments are hung from above. The special plates of food and chocolate are placed in front of the altar, not to be touched until the prayers are said and the “souls have departed.” Articles preferred by the dead in life surround the altar, to be shared later, like the food offerings, by the living. Household saints join the special offerings.  A glass of water must be placed to absorb the evil air. The floor is usually covered with a woven petate mat on which incense burners with copal are placed to perfume the whole house. Votive candles burn in front of religious images on the altar. After the dead have symbolically “eaten”, some of the offerings are shared among family members, some are carried to the cemeteries to be placed on the graves. Some portions are shared community-wide. The dead remain with the family until dusk, when they have to leave.

In the cemeteries, graves are especially decorated, with some communities offering special prizes for the best decorations. Crosses are often replaced or repainted in preparation for these special days. During the night of November 1, in some regions of Mexico, families move to the cemeteries and spend the night and the next morning communing with their dead but also with the living. Gossip, drink and sociability are shared at the gravestones. Offerings and gifts are sometimes placed directly on the graves, and candles are lit. Even Mass may be said in the cemetery.

Each community’s rituals and traditions are unique. Special forms of entertainment alluding to death prevail in different regions, including bands which are often dressed in skeleton outfits and skulls. Celebrations in rural areas are less flashy than their urban counterparts, feature fewer skeletons, and resemble more the ancient, pre-Hispanic feasts. In urban areas, especially Mexico City, celebrations are more modern and sophisticated, as well as infused with foreign influences or tourist traits: an abundance of skeletons, made out of any material whatsoever, flashy costumes, Halloween masks, “Dead” disco events. Urban museums and civic organizations often sponsor ofrenda/altar competitions.

What they all have in common is that life and death are part of a never-ending cycle.