“Carlitos” Javier Garcia Huergo, Creating his Own Universe on Cardboard 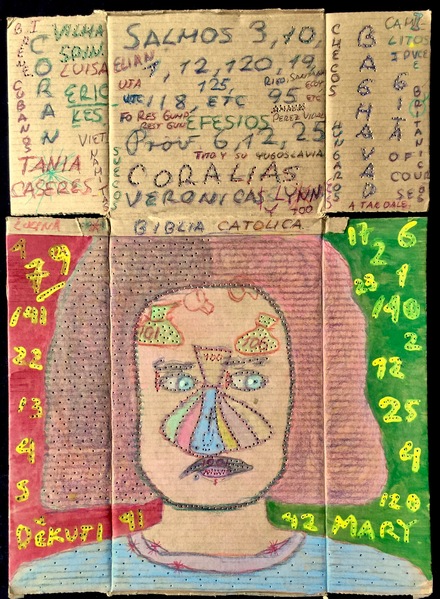 As every other country, Cuba has its share of artists who create their works out of the mainstream, far from the academy, unaware of or oblivious to the “art world”, and without the need of an audience or a marketplace. Often mentally disabled or homeless, they tend to work with humble materials including found objects or discarded packaging. Notable among these creators is Carlos Javier Garcia Huergo aka “Carlitos”. (Please also see our previous blog post on Miguel Ramon Morales Diaz.)

Once back in Cuba, Garcia was interned in a psychiatric hospital where he underwent psychoactive drug and electroshock treatment. Diagnosed as a paranoid schizophrenic, he was subsequently confined in various psychiatric institutions. Living in a state of alienation and suspicious of his surroundings and the external world, he experienced frequent panic attacks and acted  aggressively both toward strangers and people he knew. At some point he began to draw, and once started he never stopped. He prefers a pastel color palette and draws on recycled cardboard, vinyl record covers, pieces of wood and newspaper or magazine pages. His mysterious drawings combine images of human figures, birds or fantasy creatures with letters, names, numbers and mathematical and religious references. He thus creates a universe populated by inhabitants of his own inner environment which includes angels, devils and - always in the foreground - people, surrounded by text and mathematical symbols.

Carlitos Garcia’s works have been shown publicly starting in 2013. They have been featured in several venues in Havana, including the Spanish Embassy, at the Spanish Cultural Center of Miami, Florida,  the Lehigh University Museum of Pennsylvania and Gallery C. in Dubuque, Iowa. He was featured in an article about Riera Studios, Havana, in Raw Vision Magazine issue #95