IMPROVING ON REALITY: THE WORKS OF LOUIS ESTAPE 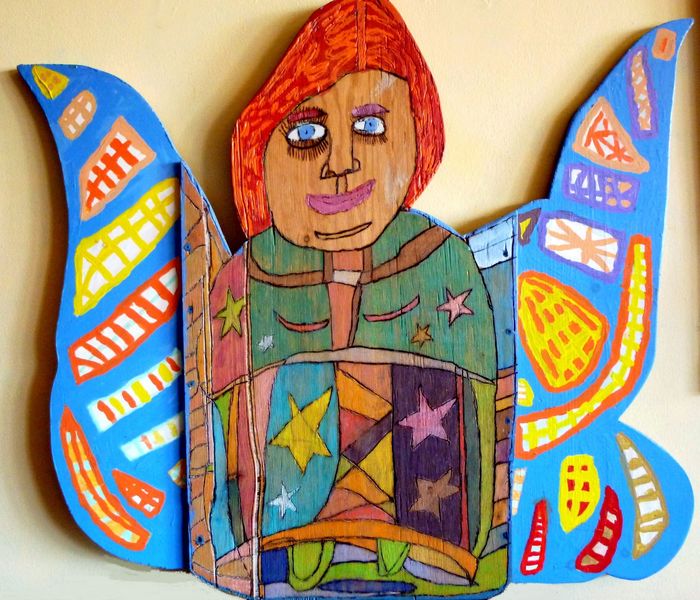 Just came across this article I wrote long ago, about Louis “Louie” Estape,  on of my favorite artists from Creative Growth Art Center. (Folk Art Messenger #61). Estape has since died.

IMPROVING ON REALITY: THE WORKS OF LOUIS ESTAPE

A 3-foot tall plywood monkey-like creature, bushy tailed, stares at us,  wide smile on  lipstick mouth, clawed arms stretched out, ready to embrace. Bright blue eyes with long, dark lashes hold the viewer’s gaze. Louis Estape just finished this piece.  “Monkey monkey monkey” he rambles, “monkey - who wants to look at a monkey? So I make it look nicer than it is, change it to a woman, because, what is a monkey? Monkey - so I change it to make it look nicer than reality. I have my own ideas, so I make art to make things look nice, nicer than reality. I draw differently - nicer!”

On paper or plywood cutouts - the latter carefully shaped and outlined, developed from a detailed paper sketch - smiling animal-people, exuberant,  mingle with  flowers, mythological creatures that evoke pre-Hispanic deities, and Catholic saints or devils. Snakes and serpents loom everywhere. Vultures chase airplanes in the sky. The color scheme is lush and tropical. Key images are often contained in frames, boxes, squares and circles intricately patterned, textured and layered, interacting with each other like patches of a quilt. Things are inside things, Chinese-box-like. Every square inch is filled with symbols, designs, written messages or alternating geometrical patterns.

Estape - ‘Louie’ to his friends - found his vocation long ago. “I want to make everything look nice, nicer than the real thing. I like strong images  - to make things stronger”. He will say this over and over again, until he rambles at breathtaking speed.

A native of Honduras, Estape lives in a supervised group home in Oakland, California, which he shares with several other developmentally disabled men. He is happy there. “It’s nice - there is no hate.” (Estape’s notion of happiness is generally defined as an absence of hate or cruelty.) He has been there for more than a decade. Before that, there were other such homes. And before that, there was Sonoma State Hospital, Psychiatric Division. Estape does not remember how long he was interned there: Fifteen years? Twenty?

Now, he spends most days at Oakland’s Creative Growth Art Center, bent over a worktable. He draws and sketches on paper or wood. Then he applies paints. He  pieces, layers and patterns images and materials until they become almost three-dimensional. A big man - six feet some inches on a heavy frame - Estape is used to towering over others.  He could intimidate by his imposing size and his deep voice, but he is friendly and gentle, easy to talk to. It is his creative work - drawings, paintings, sculptures - which Estape really loves to talk about. He craves attention.

When he gets it, it is impossible to stop hom. The words keep coming. Faster and faster, like his pictures.  Animals, fish, birds flying, caged birds, flowerpots, snakes, airplanes and rockets. His images are inspired by a fertile imagination and an attraction to all things visual. He says he loves all animals, now imitating animal grunts and squawks. “Dragons, dinosaurs, giraffe, monkeys, Tarzan.”  His favorite is the gorillla, like King Kong. And flowers, especially the rose: “So beautiful! Flowers, I always loved flowers and animals. Art to look nice.” And then, again:  “I got my own ideas. I saw things ever since I was a child in the State Hospital. My ideas are to  change reality. I got ideas from the movies, too, and from TV, but I change everything, make it better.”

Estape’s attention to detail is as exquisite as his wit.  A pink-eared “Exxon” tiger flexes his muscles, a fire-spitting dragon head nestling on his chest. To his right and left caged birds sing sweetly.  A spotted leopard-woman, flesh-pink human breasts bare, smiles enigmatically.  A curled snake rises up, cobra-like, its forked tongue a mechanic’s wrench. A dignified lady poses in an ornate, layered  outfit, but her white breasts are exposed. A wild-eyed woman, short flowered dress riding up above her crotch, is unaware of the saint at her feet. Men are not much featured in Estape’s work, unless – perhaps – in the disguise of monkeys.

Does he consider himself an artist? “Yes, I am an artist, I was always an artist, I was born that way. I make myself happy with art, I make other people happy”. Yet when asked about his early childhood years in a poor fishing village in Honduras, and any memories of  folk art, or any imagery or cultural aspects which might have later influenced him, he insists that he remembers nothing.

Minutes later, Estape repeats that he has no memories of his native country.  He was “only a small child”, the family  “too poor”. But then he gets animated again. He now recalls his village as “a happy place”, especially the ever-present marimba music. “It was nice, I enjoyed it there, it was peaceful - nobody trying to hurt you.”

His fondest memory is of his father playing the marimba - he says it again and again, excited, rambling - and “looking at fish”. Then his recollections suddenly blur - still focusing on fish, but suddenly the scene shifts to the San Francisco waterfront where his father worked in a cannery. The blending of memories and verbal cues is as creative and layered with meaning as his art: in stream-of-conciousness fashion he recalls fishing (in Honduras), which next evokes  marina (in San Francisco), then, suddenly, World War II images - marines. But no, it is the marimba he has been talking about all along, and his childhood in Honduras…..

Born in 1938, the young boy Louis Estape arrived in the San Francisco Bay Area toward the end of World War II, along with his parents and six younger siblings. “We came here because of poverty, to find a better life. But we always stayed poor”. The boy never went to school. Soon after his arrival in the Bay Area, the seven-year old  contracted measles. “That’s when the seizures started,” Estape  remembers, “Real bad - seizures seizures sin sin sin...”, he mutters, now frantic. Seizures and psychotic episodes, frightening visions, uncontrollable temper tantrums, and notions of sin mark Estape’s path from early youth into young adulthood.  Abandoned by his family, he was soon institutionalized.  “I used to talk crazy”, he says now. “I used to scare people. I had a bad temper, I used bad words”.

Does he still speak Spanish? “Yes, some, but not so good. My American is pretty good, don’t you think?” At times, his patriotism for his adopted country surges,  like when he talks about World War II. “Soldiers must fight for their country. I watched many war movies, with war planes, bombings” (he now makes hissing sounds imitating the bombs) “bombs falling on the enemy, planes falling... I like airplanes” . The monologue trails off.

His seizures are now controlled by drugs. His visions have been channeled into creative activity through the workshops he has attended regularly at Creative Growth Arts Center since 1985. Here, he finally learned to read and write.

Founded in the mid-1970’s, Creative Growth Art Center provides art materials, studio programs and technical assistance to disabled adults with creative talent. A community-based non-profit organization that today includes more than 100 disabled adults, it not only furthers its clients’ artistic potential but also shows and promotes their works in its gallery space. Some of the program participants have attained international fame, like Judith Scott and the late Dwight Mackintosh. It is here, in downtown Oakland, that Estape’s visions find expression and take shape.

Over the years, Estape’s imagery has increasingly become infused with symbols of religious devotion: A brightly colored angel smiles with wings spread widely. A masked  “peace bandit” wears a pistol on his belt but a cross on his forehead.  Written messages of god’s love appear on a baseball cap. A painted wooden guitar contains pictures of a smiling Christ, crucified, while the devil bends over in defeat.  An archangel in Spanish colonial dress waves a hand from inside a potted plant.

Sin and redemption are constant themes.“The church changed my ways, it saved me. I am a better person now. God sent his son who died on the cross for our sins.” Estape goes to church regularly. It changed his heart, he says.  When asked what  he loves the most  in his life, he does not miss a beat. “Jesus. Then God. Then Mary, then... the rest of the Holy Family. Then, my neighbors”.

He stops. No time to talk now. So much to be done.

This article is based on conversations with Louis Estape and the generous cooperation of Stan Peterson and other staff at Creative Growth Art Center.

Please see our collection of Estape's works on our website.