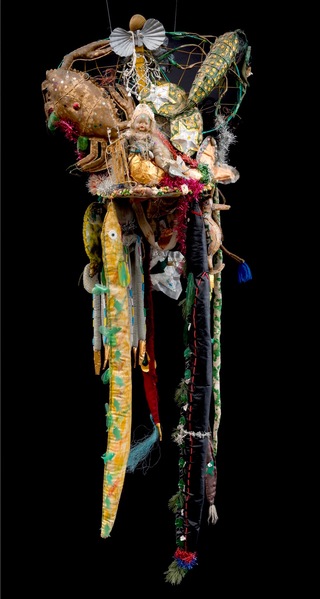 Almost 20 years ago, during one of my visits to Salvador, Bahia, I came across an incredible, don’t know what to call it - carnival costume / wearable altar / art brut installation / outsider art assemblage. A dozen and a half years later I lent the piece to a spectacular exhibition at the American Folk Art Museum in New York City: When the Curtain Never Comes Down: Performance Art and the Alter Ego. The maker of this incredible work is Raimundo Borges Falcão, about whom not much is known. The exhibition produced a fabulous catalog. I wrote a page about Borges Falcão and his incredible work:

The Brazilian state of Bahia, a principal location the the country’s early slave trade, is famous for its Africa-based rituals. During Carnival a million tourists pour into its capital, Salvador, “the fountainhead of the transplanted African cultures”.  Carnival is a highly choreographed event involving many different actors, coordinated costumes, and months of rehearsals. In the midst of this buoyant pageant an unusual solo show takes place, staged for an audience of one.

Raimundo Borges Falcão, an illiterate black man of an uncertain age, lives alone in a windowless wooden shack on the rural outskirts of this seaside capital. The interior of his tiny home is filled floor to ceiling with materials he scavenges from scrap heaps which he gradually transforms into wearable fantasies that he reveals at Carnival. Once a year, this seemingly unremarkable man shines brightly. Traversing the historic city center on home-made roller skates, he proudly shows off the costume he has prepared for this purpose, to be worn only once. In one example plastic dolls become glittering mermaids on a striking headdress; tinfoil-wrapped fish sculptures share space with a gilded seahorse and a sparkling octopus; sequin-studded crabs extend their claws; shoulder cape, wrap skirt and bracelets look like they were caught in a magician’s fishnet; and scepters resemble those of the Orixás, the African ancestor gods of Salvador, whose avatars in glittering costumes hold staffs and mirrors symbolic of their powers.

Oblivious to the movements of the carnival dancers surrounding him, Borges Falcão becomes a one-man art show, moving to its own rhythm. His flamboyant outfit is meaningful only to him; he is an eccentric at odds with the mainstream, yet his work is firmly grounded in his culture. Yemanjá, the ever-present Yoruba goddess of oceans and "Mother of the Waters”, is venerated throughout coastal Brazil. All of Borges Falcão’s costume sculptures seem like an altar to the deity where discarded objects become offerings. His works, like those of so many other creators in the Afro-Atlantic diaspora, hints at a collective memory of scrap heaps which in much of Africa stand for graves - portals to the realm of ancestors.

The image here shows one view of the carnival costume’s headdress. Please see more of his pieces on our website.