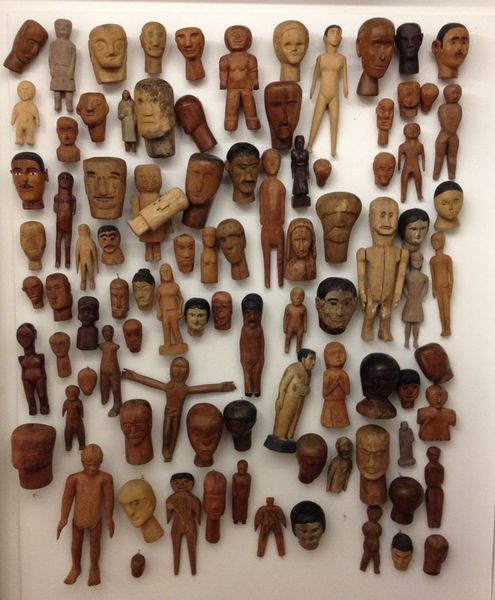 Brazilian ex-voto sculptures - wooden heads, torsos, body parts - represent a special art form without “artists”. Made for generations by anonymous creators, men and women from rural communities who were never exposed to the concepts of art, three-dimensional ex-votos are unique to Brazil’s Northeast (“Nordeste”) - a world synonymous with poverty and backwardness.

This region is plagued by frequent droughts and crop failures and has the highest rates of illiteracy and infant mortality nation-wide. It is also the birthplace of many legends and superstitions and the magical thinking which shape much of Brazil’s popular culture.

The lack access to government help or medical services has fostered home-made religions and belief systems among the population, meant to provide a refuge from hardship and a way to cope with adversity such as  death, disease, accidents, violence or natural disasters. The faith in miracles takes the place of official intervention.

Religious sanctuaries or “Houses of Miracles” are part of the landscape, their interiors overflowing with wooden limbs,  body parts and heads whose faces seem to stare right at the visitor. Believers in crisis go there to petition their local saint for relief, and return with an object once the relief is provided.

Heads, figures and body parts are typically carved from local wood or sometimes made from clay. They are direct manifestations of the Catholic, or syncretized,  “miracle” as understood in this region. As physical proof of such a miracle performed by a saint in response to a believer’s plight, the objects represent the fulfillment of a vow (“ex-voto”) or promise made to the saint in return for a favor granted. Typically the object represents the nature of the petitioner’s problem, often a physical one, and the fact that the favor sought was granted. It is not unusual for these sculptures to show physical deformities, wounds, scars or other evidence of disease or violence. No two of them are ever alike, and each piece has its own story. Some are largely naturalistic and fashioned to produce a likeness to the person at the center of the divine intercession. Others are almost abstract, and still they retain a powerful expressive quality. Some are personalized by the petitioner. They may be signed or dated or indicate the believer’s place of origin. What they all have in common is the miracle embedded in them.

For more read my article here

Our collection includes over one hundred museum quality ex-voto sculptures from Northeastern Brazil.