How we Became Special Guests at a Santería Feast in Havana 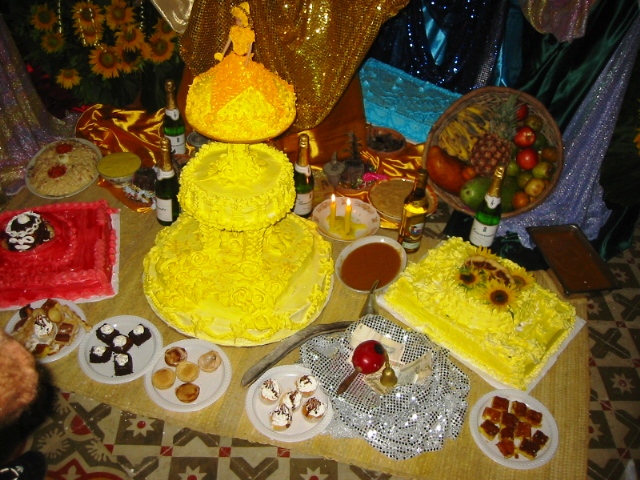 Since a Papal visit to Cuba in 1998 forced the Castro government to undo its ban of religious practices, worshippers of all flavors were out in the open again, yet none more so than the adherents of the Yoruba based religion which, fused with Catholic elements, has been practiced widely in Afro-Caribbean regions since the beginning of trans-Atlantic slave trade. Santería, conducted in secrecy during much of the Cuban revolution, had started to bubble up to the surface again.

A few years later there were some santería supply stores in Havana (where you shop for the gods, including for animals to be sacrificed to them) if you knew where to go. By now they have spread through the neighborhoods and you can see them everywhere. At the same time, tourist trap santería rituals have popped up as well, to satisfy foreign tourists’ appetite for an “authentic” Cuban experience, in exchange for hard cash. Make-believe santeros,wearing ceremonial white and sporting beaded necklaces, circle around sightseers in Havana looking for business.

The real thing, however, is a rather private affair. Santería rituals and ceremonies take place in casas de santos - house temples in the homes of initiated priests/ priestesses where specific altars provide a space for worship for the different orishás - the various deities of the Yoruba pantheon that are typically syncretized with Catholic saints.

I had been interested in this subject since my extended stays in Brazil in the 1990’s and my experiences there with candomblé, a religion very similar to santería which honors the same deities. Now, in the early 2000's, when I started to go to Cuba regularly, I wanted to know where to shop for the African saints in Havana. I also had a specific reason.

Back in New York I had just been invited to participate in a group show of artists creating altars dedicated to particular belief systems from around the world. I was still in the middle of preparing my project - a seaside altar to Yemanjá, the incredibly popular Afro-Brazilian goddess of the oceans. I had most of the ingredients I needed for my installation: the right kinds of candles and flowers, mirror and fan, seashells, a little blue-and-white boat to hold the presents offered to the deity, champagne, and everything else that was essential for her altar. What was still missing was her striking necklace of blue and white glass beads which symbolizes her powers and her rule over the oceans.

What better place to look for those beads than in the santería markets of Havana? After all the deity, here called Yemayá, is not only widely worshipped in Cuba as well, she is actually the patron saint of Havana’s port, Regla. In the sprawling Cuatro Caminos market district, which provides food both for humans and gods, I found just the right necklace. I wore it on the way home to our place in Old Havana, not really thinking about the fact that this necklace is a divine object which represents a bridge to the deity, and that it is usually bestowed upon the wearer during a specific ritual. The glances of passers-by, with flashes of recognition, reminded me, and the comment of one man who called me “sister”. You do not mess with these beads.

We are now walking through a rather poor looking residential neighborhood on the edge of a warehouse district. It is getting dark. And there, down the street, are all these people milling about in front of one house. Everybody dressed in ritual white and the colors of a specific Yoruba deity which, of course, includes beaded necklaces. Something special going on, I say to my husband as we are walking by. Then I am grabbed by the arm, and we are both pulled into the house, along with everybody else. Come, come, you are one of us, and this a the special day for Oshun - your sister! Oshun, sister orishá of Yemayá, is the other water deity, ruler over rivers and lakes. Her colors are yellow and gold.

Turns out that this is her priest’s house, a casa de santos, and as it is his birthday today he presides over the celebration in honor of the deity whom he serves. Inside, an enormous altar has been prepared, piled high with cakes, sweets, fruit, sunflowers (all yellow!) and bottles of bubbly. The centerpiece is a 3-story wedding cake construction with layers of yellow icing, topped by a Barbie doll look-alike clad in yellow and gold - a figure of the goddess herself. Another cake with red icing is for Elegba, the ever present messenger god - but that’s another story…

We all hug and hold hands, share drinks and food, and dance a little during this exuberant festivity. We are the only foreigners here yet right now we are part of the moment. We thank everybody for their hospitality, leave a small contribution for the feast we shared, and continue walking through the dark streets of central Havana, and then on to our little guest house.

The next morning a couple of tourists stop me in the street and ask me if I knew by any chance where they could experience a santería  celebration. I answer truthfully : “I have no idea”.