Juan Roberto Diago and Us 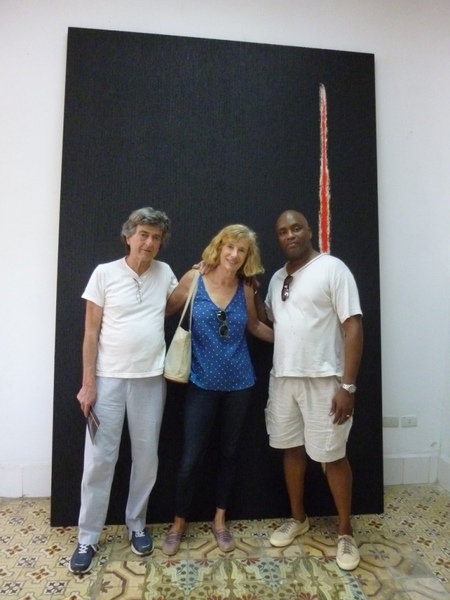 To tell the story about how we - that is Michael and I - became friends with Juan Roberto Diago Durruthy, commonly known as  “Diago”, I have to tell it backwards.

The last time we saw him in Havana, in January of 2017, Diago started reminiscing. How long had we known each other? More than a dozen years, and much had changed. Now that he is an international star in the contemporary art world, he is represented by major galleries, and his works are included in international museum collections and featured by leading auction houses. He has solo shows in major venues around the world. But, he said, collectors, gallerists and curators very familiar with his works and the provenance of his pieces keep asking him: Who and what is this “Mariposa” (our other gallery name), or this “Cubanartcollection” (our collection’s web name)? They have so many of your works - but who are these people, and how did they get them?? So, Diago said, over drinks at his house, why don’t you tell the story? The story of a New York mathematician, his art nut wife, and one of Cuba’s great artists.

Before I start at the beginning I have to say that today, Diago the internationally famous artist,  is very protective of his privacy. He does not want potential buyers who have seen his works to show up at his doorstep. He does not have a website. He rarely uses email. (“I don’t need that. I have no time for that”. ) He does not want me to give his contact information to anybody who asks. I had to promise him that I would not. He is busy. Yet every time we are in Havana and I email or call him, he says, come on over. Seems we are always welcome. Because, he reminds us, we knew him back then, and liked and collected his works back then. THEN meaning when he was much younger and a lot less famous, an “emerging” artist whose works, while not inexpensive, were not yet so obviously a “good investment”. They were intriguing. They showed a different side of Cuban society, and they still do. They challenge the official portrait  of a revolutionary state where all are equal and skin color does not matter. They confront. They speak of racism and poverty. In his paintings, peoples’ faces have no mouths, they cannot speak.

Okay, rewind. - In 2005 we started to go regularly to Cuba. We had been there before, but the last time was during the infamous “special period”, and much had changed in the meantime. We were also art collectors, focusing mostly on Latin America, on self-taught or folk artists, outsider artists and ethnographic art. Cuba would be different. We were aware of its vibrant and sophisticated art scene, and we decided to explore it. Our main interest was to get to know artists living and working in Cuba today, not exile Cuban artists. Why? Because leaving your country and culture for a different place changes who you are or what you are saying. Or, to put it another way, staying put even when the grass is greener elsewhere defines an artist and his or her identity.

Where to start? Michael had a friend and colleague in Havana who was part of UNEAC’s (the National Writers and Artists Union’s) inner circle. He introduced us to an artists’ agent and curator who, in his apartment overlooking the Malecon, showed us images of different Cuban contemporary artists. We knew of some of them but were particularly struck by the works of Juan Roberto Diago Durruthy. Ah, you like Diago, Juanito said. Would you like to meet him?  Of course we would. He picked up the phone. Diago will be here in 20 minutes, he assured us.

Less than half an hour later an old, beat up Lada pulled up. The driver was the artist himself, a tall Afro-Cuban in his early 30’s who somehow seemed too big for this small old car. Next thing we were in his spacious 19th century house in Havana’s once elegant Santos Suarez neighborhood. The house itself was a work in progress; a fixer-upper in the process of being reclaimed from decades of neglect and decay. We stepped over wooden planks and climbed over loose wires to his upstairs studio. And for the next five years we came back at least once a year.

Aside from his art, and his thinking behind it which addresses  Afro-Cuban culture, the island’s slave history and its lasting effects on its people, Diago shared with us different aspects of Havana. He took us a on tour of the famous Instituto Superior de Arte (ISA), the prestigious art school that is normally off limits to outsiders, where we visited young artists in their painting/sculpture/mixed media studios. (Diago teaches there.) Another time he took us to a nearby fishing village where he had built himself a second studio. He arranged for a lovely lunch at a local neighbor’s house. Then, when I asked him about the frequent use of found materials in his works - scrap metal, discarded wood, burlap sacks - he told me that that was the material many people were still using every day to build or fix up their humble homes in the shantytowns around Havana. When I said, what shantytowns, he said, let me take you to a place. Half an hour later we were in such a shantytown where the local people - mostly dark-skinned Cubans - had built their shacks from exactly those materials. Everything repurposed from scrap. And everybody knew him there. I believe it was in Marianao, close to where he had grown up.

After 2010 we stopped going to Cuba for some years, mainly because we now had a new part-time life in Buenos Aires, but that’s another story. But in 2015 we were back in Cuba, and again in 2016 and 2017. Havana and Cuba were changing. At least that’s what it looked like to us although many Cubans would disagree, arguing that nothing ever really changes there. Diago now drives a comfortable modern car. His house is once again the gorgeous mansion it had once been. His hair has turned gray. The young son we knew when we first met him is now a tall and handsome young man, and there are two other children. Diago also has a home in the historic town of Trinidad. (“This is for my kids, for their future.”) World famous for its colonial architecture, the region is also known for its countless 18th century sugar mill ruins and its slave past. Afro-Cuban religious societies continue to function there to this day.

Unlike many successful Cuban artists who now live mostly in Miami, Madrid or Mexico City, Diago has no intention of living elsewhere. But he is hard to get a hold of these days. He is as likely to be at the opening of one of his exhibitions in Paris, New York, Berlin or Beijing as at home in Cuba. And when he is there, he works. At his house last January, Diago was getting ready for his upcoming exhibition at Harvard University’s Hutchins Center for African & African American Research: “The Pasts of This Afro-Cuban Present”, an extensive mid-career survey that generated much press coverage and produced a gorgeous catalog. This would be followed by his installation at the 2017 Venice Biennale, which we visited, and then by another solo show in the U.S. in 2018: “La Historia Recordada” at the Halsey Institute of Contemporary Art at the College of Charleston, SC.

Over drinks that afternoon we also talked (like always!) about Cuba’s future which once again seemed uncertain.  Obama had been there the year before, and the U.S. had reopened its embassy. Raul Castro had relaxed a few rules on the State economy, allowing some room for private enterprise. Ordinary Cubans were traveling abroad to visit relatives and see a bit of the world. More visitors were coming to the island. Yet that day we knew we were on the cusp of a new, potentially fundamental change that none of us right then wanted to contemplate. The inauguration in Washington was a week away. By now we all know more. Things have definitely turned for the worse - at least for the moment.

When he is not traveling Diago is there, in Cuba - his tierra - doing what he was taught by his own teachers, “providing light where there is shade”.

We are looking forward to our next visit with him.