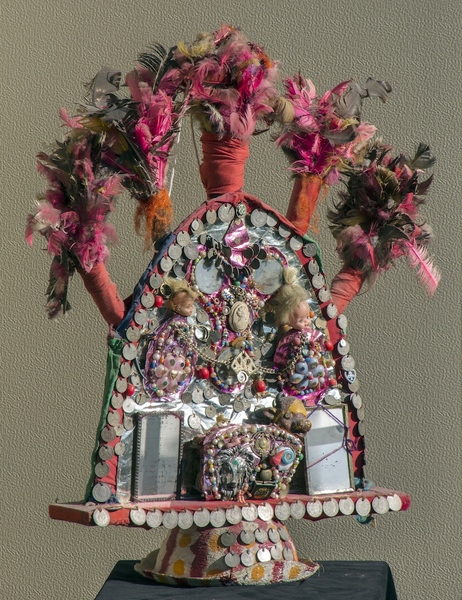 Each June, thousands of Ecuadorians flock to indigenous highland communities like the ancient village of Pujili in the Andean province of Cotopaxi. The occasion is Corpus Christi, a week-long, boisterous pageant  whose highlight is the parade of El Danzante. This festival, celebrated throughout Ecuador’s highlands, is like no other, a joyous pagan ritual honoring sun and earth and harvests blended with Catholic elements. All over the Andes, Christian rituals imposed on the local populations during the Conquest were soon remade to match up with pre-existing indigenous cults worshipping nature and celebrating the agricultural cycle over which Pachamama, the Inca earth mother, presides. The worship of Inti, ruler of the sun and ancestor of all the Inca, is at the center of the Corpus Cristi ritual. Drums and flutes call out to the spirits while the dancers make their traditional moves in honor of both ancestral gods and the Catholic Eucharist.

The Danzante parade involves elaborate headdresses or crowns and costumes that take months to prepare. The central character -  the dancer - is dressed in white garments and a colorful tunic embellished with a variety of decorations including embroidery, fringes, stones, shells, and - most important - shiny objects such as tinfoil. The headdress is the most important part of the costume. Heavily adorned, it is a complicated construction which, once finished, could weigh several kilograms. Aspiring danzantes must train for years until they can carry a crown on their heads and dance in the parade that can go on for hours.

During the 19th and early 20th centuries these headdresses incorporated reliquaries and precious jewels. In more modern times, found every-day objects have been substituted, such as cheap beads, custom jewelry,  ribbons, foil and tinsel, plastic dolls, mirrors, buttons, coins, feathers and more. Again, shiny objects and mirrors are essential to this outfit. They represent both the splendor of the Inca Sun God and the sunburst of the monstrance used in many Catholic holidays.

We collected the headdress shown here in Ecuador in the early1990’s but it dates from around 1960. Its assemblage features beads, ribbons, tinfoil, plastic dolls, mirrors, buttons, coins, feathers and more.